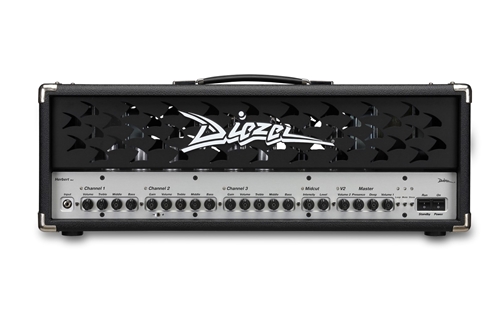 The +/- switch used to be switchable by  hand only and is now also midi switchable.

The + mode adds another triode system to the crunch channel and becomes a high gain rhythm channel in “+” mode.

It´s a combining 2nd and 3rd channel of the VH4 preamps.

There is an available footswitch with an additional +/- button. It´s called FS8 in case the customer does not have a midi control board.

The Diezel Herbert is a mighty 180-watt head with three completely independent channels, including separate EQs,  for perfectly dialed sounds at any output level.

The Herbert started out as a clean sheet of paper. Peter Diezel began with a different set of parameters. This time, the goal was to produce an extraordinary performance amp, capable of delivering delicate, dynamic shimmer; detailed, focused crunch and aggressive, soaring solo tones effortlessly – right out of the box – with the knobs at 12 o’clock.

Channel 1 is classic Diezel clean – as solid and pure as a piano. Massive headroom, crystalline sparkle, articulate mids – it’s all there, and it holds together beautifully. The Volume, Treble, Middle and Bass EQ points are carefully selected to allow the player to nail the desired voice. The mid cut feature presents even more dialing options.

Channel two delivers a wide range of crunchy tones, from barely hairy to Sasquatch and beyond into barbaric solo territory via the dual voicing toggle switch. The (-) mode sets up “vintage” cleans to Plexi sounds to JCM 800snap and sizzle. The (+) mode has a similar voice, but with much more gain – achieving Diezel trademark crunch with tight, punchy and fast attack – the dream tone for those who prefer the harder rhythm stuff. Keep going – there’s so much meaty gain here, you could be completely happy with just channels 1 and 2 – until you play Channel 3.

Channel 3 begins in high gain territory with excellent picking sensitivity and note control. It could be described as percussive, ferocious, simply brutal. From metal rhythms to Recto Psychosis to screaming (or creamy) leads – it just depends on your style/axe/fingers. Crank the mids a bit above noon to add some bite. Simply engage the second master as a volume boost. Channel 3 never runs out of muscular, meaty gain – it’s almost a spiritual experience.

The versatile Mid Cut feature is assignable to all channels and has a level control for output matching when engaged.

Store switches, loop and mute patches simply by hitting the store switch. If you want to expand your rig, Herbert has two different series loops. Use the switchable loop to add channels with an outboard preamp. Use the non-switchable with your preferred FX unit. If you need to tune while gigging, simply set a patch muted with midi.

Herbert's master section features dual volume controls, a global presence and a “Deep” knob, which is an active bass control that adds low end punch (centered at around 80Hz).

With colossal headroom, sophisticated cleans and vicious dirty sounds, the Herbert is unlike any other amp you’ve heard. Hear one with your own ears as soon as possible

You can be the first one to write a review.
Write a Review